We prefer this to foolish, negative, silly, "entertainment" TV from America.

The Art of Design

Posted by Mathview at 3:31 AM 0 comments

It seems Vimeo (anagram of movie) has gained a reputation as the high class alternative to YouTube.

Not entirely the case, but Vimeo is an impressive service attracting some of the best pure movie making people.

YouTube retains the advantage of volume. As of 2012 YouTube reports about 4 billion (yes that's billion with a B) video views per day.

Note that Vimeo offers a basic free service which is great for most of us. Standard Vimeo offers 500MB video upload limit per week and one HD video per week for free.

Vimeo Plus for $60 per year supports 5GB per week uploads, no banner ads, HD embedding, and some other features.  There's also a Vimeo Pro service for high volume usage commercial applications.


Here are some specifications of the services offered by Vimeo.

All videos uploaded before August 2010 were re-encoded. Non-HD videos re-encode at a maximum of 30 frame/s and they also have significantly higher bitrates than other competing video sharing sites.

Standard Vimeo users can upload up to 500 MB of videos per week, and up to one HD video per week (additional HD videos uploaded within the same week are encoded to SD).

Vimeo-Plus
As of July 22nd, 2010, the site offers unlimited HD embeds.  As of January 4, 2011, Vimeo Plus users can upload videos that are up to five gigabytes of footage, roughly equivalent to 2.5 hours of HD video. This makes it possible for full length, high-definition feature films to be uploaded to Vimeo by Vimeo Plus users.

The two-day festival included video screenings and workshops from the likes of Philip Bloom, Lawrence Lessig, and DJ Spooky, and an award show hosted by Ze Frank. A 3D projection-mapping displayed on the Vimeo HQ/IAC building concluded the festival.


Pop world stars who have posted their stuff to Vimeo.


Founders and Operators of Vimeo

It was founded by Jake Lodwick and Zach Klein in November 2004, who left the company in 2007 and 2008 respectively.

Barry Dillar's IAC (InterActiveCorp) purchased Vimeo in August 2006 as part of its acquisition of Connected Ventures.

In summary, Vimeo offers the video/movie maker or commercial factor a professional quality streaming video platform that can offer noticably higher quality images than competing services.  Such an edge in quality is attractive to those who make use of online streaming video in their businesses. Vimeo has a much smaller audience reach than YouTube. The Vimeo audience is only about one-half percent of YouTube's total audience.

For all things Mrs. Parker


"Must sees" for the slavish fanboy or fangirl.

We can only imagine what Mrs. Parker and her Algonquin round table friends would say about us.


But our imaginations may not be up to the task.

The Round Table first met June 1919 for a luncheon to welcome home Aleck Woollcott, the drama critic for the New York Times, back from World War 1.

In 1987 the Algonquin was designated a New York City landmark, however it is not protected by the Landmarks Preservation Commission.

A commemorative painting by Natalie Ascencious was unveiled in 2002 on the occasion of the Alqonquin Hotel's 100th anniversary.

In 1996 Stuart Silverstein edited “Not Much Fun: The Lost Poems of Dorothy Parker.”
His comments:

"The enduring legacy of the group of newspaper writers, magazine editors, critics, actors and hangers-on is timeless."

"The first lunch at what later was called the Round Table probably occurred eighty years ago," Silverstein said in 1999. "Yet the term "The Algonquin Round Table" still holds substantial cultural resonance; for example, during the past television season at least three sitcoms employed it as an ironic punch line to skewer characters who spoke badly or stupidly. Is there any other person, or institution, or event from the interwar period that could possibly be used by a mass-market medium as an implicitly understood cultural reference? I cannot think of any -- not even Lindbergh (May 1927) not any more. Perhaps the Stock Market crash." 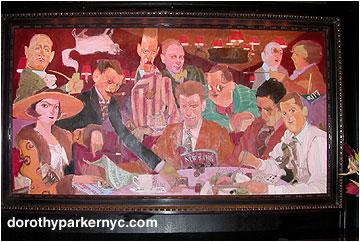 Those who lunch at the Algonquin round table

This image of the Vicious Circle a painting by Natalie Ascencios from dorothyparker.com.

This information mostly taken from dorothyparker.com.